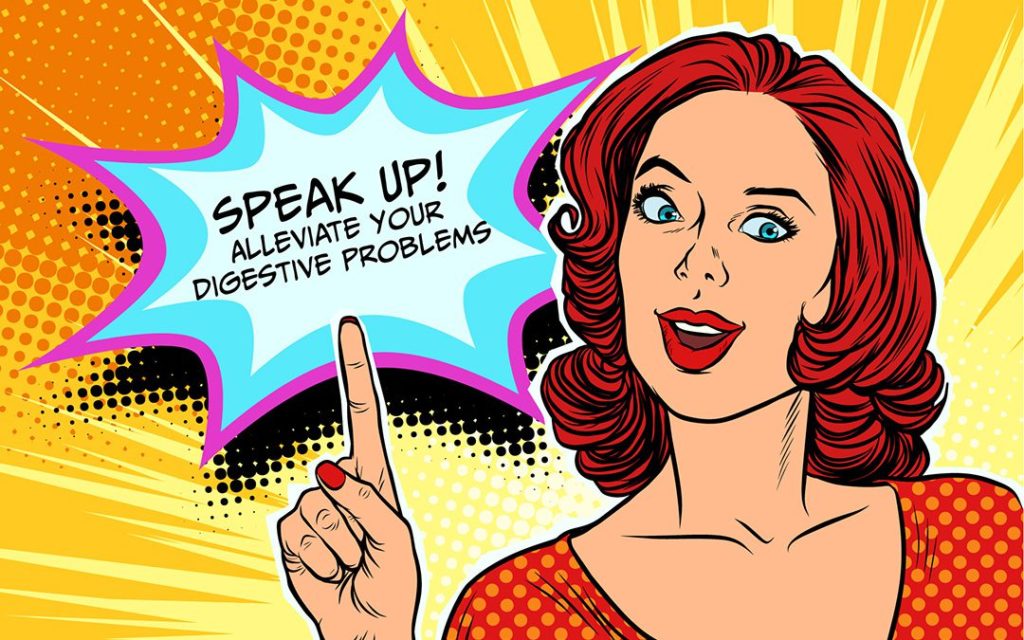 Speak Up! Alleviate Your Digestive Problems

According to the Centers for Disease Control, more than 44 million people per year visit their doctor with digestive system complaints.

It is estimated that an additional 70 million more people are affected by digestive disorders, but suffer in silence and never speak to their doctors. Though many digestive disorders are mild and merely an annoyance, an unhealthy digestive system creates an environment in which serious diseases and conditions thrive. If you want to avoid chronic and possibly fatal digestive conditions, you need to get your digestive system back on track. For many, this is more difficult than simply eating a “healthy diet”.

Digestive disorders are usually more complicated than just an upset or queasy stomach. Conditions such as leaky gut and GERD can lead to pain and discomfort, and prevent an otherwise healthy person from living a full life. Cholecystitis is an inflammation of the gallbladder, an organ many people do not even realize affects their digestive health. The gallbladder is located beneath the liver and holds digestive fluid that is released into the small intestine. When the gallbladder malfunctions it can lead to serious issues and can eventually rupture. Symptoms of cholecystitis include steady pain in the upper right abdomen, sweating, nausea, vomiting, bloating, fever, chills, and pain that spreads into the shoulder and back. Symptoms usually flare following a large meal or after eating food with high-fat content. In most cases, cholecystitis begins with gallstones, but develops into a more serious problem.

When a person overeats, it aggravates a number of digestive issues. In many cases, maintaining a healthy weight is the best way to alleviate the symptoms of digestive problems. However, when a person goes to extremes to maintain a healthy weight it can create just as many digestive challenges. Those suffering from eating disorders such as bulimia, anorexia, and binge eating can cause just as much damage to their system.

Unfortunately, typical diet changes might not be enough for everyone to manage their digestive disorders. People react differently to foods, so the key to a healthy digestive system is determining which foods are “safe” for you. Immuno offers a variety of tests that help patients determine which foods cause poor digestive health. One of the most common digestive issues is celiac disease, which is best managed by avoiding items containing gluten. The Anti-Gliadin Test helps you determine if you have gluten sensitivity, celiac disease, or one of the more than 100 chronic conditions associated with elevated levels of gliadin.

The Anti-Gliadin Test is most effective when paired with the Tissue Transglutaminase Assay (tTG). Both tests can aid in the diagnosis of celiac disease, as well as other digestive disorders. The tTG is performed when the Anti-Gliadin test shows evidence of gluten sensitivity. In some cases, both tests are conducted simultaneously to shorten the time it takes to receive an official diagnosis.

Gluten sensitivity and celiac disease are not the only common digestive problems. People suffering from ulcers, chronic gastritis, and duodenitis are often diagnosed with Helicobacter pylori (H. pylori), which is a bacillus that colonizes in the upper gastrointestinal tract. Antibiotic treatment is often prescribed to treat the problem and usually decreases intestinal inflammation. H. pylori is also linked to gastric carcinoma, so it is important for those who are suffering to seek treatment as quickly as possible.

Candida Albicans, which is a form of Candidiasis, is caused by Candida overgrowth in the lower gastrointestinal tract. People will suffer from a great deal of pain and discomfort from the condition. Candida Albicans will begin its overgrowth when someone is being treated with steroids, oral contraceptives, and antibiotics. Individuals can prevent future Candida overgrowth by eating a diet low in sugar, refined carbohydrates, and yeast. Also, taking probiotics greatly help in reducing the overgrowth of the opportunistic Candida Albicans. There are several probiotic choices out there and here is one we recommend: Jarrow Probiotic.

Avoiding digestive issues can be as simple as adhering to a specialized healthy diet. Avoiding foods that are known to cause digestive issues can keep problems at bay, but might not be enough for everyone to maintain digestive health. Immuno can help you develop a diet focused on preventing your specific issues.